NEW BEDFORD, Mass. (WLNE)– A female was displaced from her house after a home fire in New Bedford Sunday night.

New Bedford firemens reacted to a structure fire prior to 6 p.m. on Fort Roadway.

District chief Bob Mourao stated the fire began outside the structure however went up the wall and took control of the attic.

There were photovoltaic panels on top of your house, which was a significant issue for Mourao. Nevertheless, the attic did not collapse. Your home suffered “costly” damage. 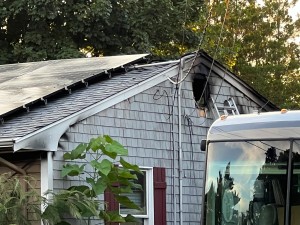 Fire began on the outside prior to going up the wall and going into the attic.

Almost 2 lots firemens worked to put out the fire, 3 engines and 2 ladder trucks were included. The American Red Cross was on scene.

The female citizen likewise had a family pet that made it out securely.

There were no hurts.